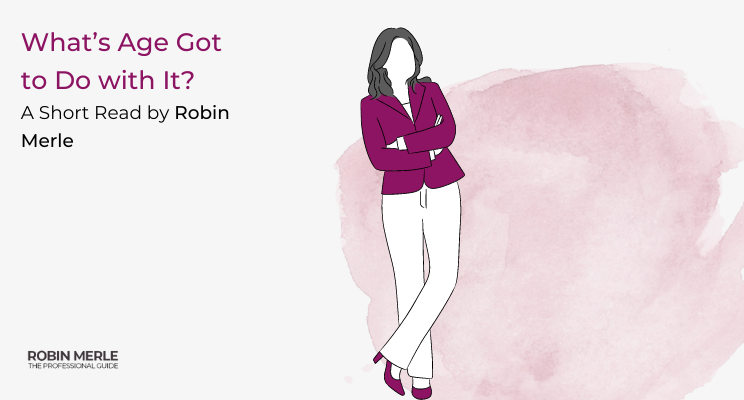 Ageism is a serious issue in the workforce. Let’s pause to celebrate the trailblazers. If Glenda Jackson at 82 can play King Lear, we’ve got this. Read on….

Six months into her last job search, Gloria (not her real name) finally figured it out. Her best bet was to be hired by a 60-year-old-woman. She was also a 60-year-old woman.

“When hiring managers who are not 60-year-old-women look at me they see Age,” Gloria said. “My decades of experience and millions of dollars delivered equals Age. Why?”

Gloria has an outstanding resume; a network of experts she can call on to accelerate solutions; and enough associates from different generations to know that strong opinions fuel creativity.

One of Gloria’s friends, a retired Global Vice President at a financial services firm said, “It has nothing to do with the number. When I was 40, they wanted to hire younger.” Her simple explanation: Younger costs less.

A former Vice President of Development at a university said, “They equate youth with innovation.” Really? Gloria and I go to the same professional conferences as everyone else and listen to what’s allegedly new, how markets are changing, which organization created a brilliant program to resolve what others were muddling through.

Innovation has nothing to do with age. Connecting the dots based on data to develop a new approach is ageless.

Is it a question of energy? The newly appointed 66-year-old head of CBS News, Susan Zirinsky, scoffed at this when she was asked how her age would affect her job. “I have so much energy that my staff did an intervention when I tried a Red Bull.”

Admittedly, I have a very bad stigmatism when it comes to seeing people according to their demographic. I’m age-blind. I’m also industry-blind. I’ve hired candidates for fundraising roles from for-profit and non-profit organizations; from fields as diverse as media and entertainment to academic medicine.

I’ve hired for skills, talent, sense of humor, adaptability, and spark – that look in the eyes that tells me they get it.  The result: a colleague at one of my former organizations said, “Everyone you hired will survive. They’re that good.”

But this isn’t the norm. A new report from the Center for Talent Innovation found that it was rare for “people to choose proteges who don’t look like them.” The report surveyed 3,200 college educated employees across the country. It found that 71% said their protégé was the same race or gender as their own. Why? The common answer was that it made them “feel comfortable.” Julia Taylor Kennedy, Senior Vice President at the Center, acknowledged that the new report “reinforces what we’ve known on a gut level for years.”

Now back to Gloria and her job search. She told me her best and most fascinating interviews had been with 60-year-old women with the savvy, reputation, and positional power to be themselves.  More than a few were brought into organizations to fix deficit situations and work miracles. I know now they are part of “a demographic revolution” that is underway, according to Professor Susan Douglas at the University of Michigan.

Nearly a third of women aged 65 to 69 are currently working, up from 15% in the 1980s, reported Harvard economists Claudia Goldin and Lawrence Katz.   #MeToo is changing the perception of their expertise and value, wrote Jessica Bennett for The New York Times.

These women are risk-takers, change-makers, and consensus-drivers. Not that I would ever generalize about a demographic. “We had professional careers, we were achievers in our fields, and we’re comfortable in our own skin, said 78-year-old Donna Shalala, who was recently elected to the House of Representatives.

“I think older women are stepping forward because they just don’t have any craps to give,” said Zerlina Maxwell, who formerly worked with Hillary Clinton. “Black women of a certain age especially, they have lived through a lot.”

Hiring for expertise and value is a no-brainer, but let’s go further. Let’s get more experienced, comfortable-in-their-own-skins women on corporate and non-profit boards. You know which boards I mean–the homogenous boards with diversity goals? Can you imagine how that would change the way our boards look alike, talk alike, and think alike?