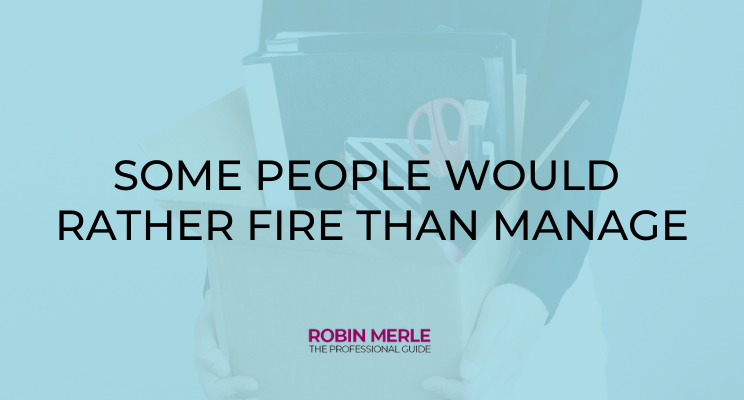 30 Aug Some People Would Rather Fire Than Manage

In the past three months, I’ve heard too many stories about people finding out, after they were fired, that their boss had a reputation for doing just that: firing people. If you’re an industry insider, you might be savvy enough to avoid those managers and to steer clear of organizations that have a reputation for “high turnover.” High turnover, we know, can be code for unrealistic demands in a resource-constrained culture built around a hard-driving leader enabled by a naïve or disengaged board. Just saying….

But if you’re new to an industry or area, you’re more vulnerable. Most of us do not take on a new role as if we’re preparing for battle, nor should we. We go into it with plans, strategies, good intentions, and the desire to make a difference.

How can you avoid becoming kindling for a firing manager?

So what can you do to avoid becoming kindling for a firing manager? Here’s my advice, targeted mostly for those considering a new role, though this applies to anyone who needs to move on.

If you’re a candidate for a new job and you’ve had many conversations leading up to the point of the offer, sit back and reflect on those conversations and negotiations. Did the goal posts keep moving? Did you have a negative gut instinct about your soon-to-be new boss but dismissed it as your nervousness about stepping out of your comfort zone?

For more about paying attention to how you feel, check out Annie Murphy Paul’s “The Extended Mind” or listen to her interview on The Ezra Klein Show. It will validate the power of instinct.

Choose your next role based on the person you’re working for, not the organization.

This is a common mistake, especially in the development field. Fundraisers are mission-driven. In non-profits, we are lured by the promise of working as forces for good, be it climate change, health care for the underserved, addressing hunger, etc., and we should be. That’s why we got into the field. Unfortunately, sometimes this blinds us as to who we’re working for and how the organization is run.

Check references for your new boss.

Yes, turn the tables. Teri, not her real name, did not find out until after she was let go that her boss had a reputation for firing people. He had, in fact, fired 4 other people before her. For this particular boss, firing was easier than managing. Sara loved the arts and signed on to fundraise for a prestigious organization. A month later when she was out of a job, a friend tipped her off about press coverage documenting the organization’s turbulent history. Even though it had happened a few years ago, the dots were connectable to her boss and her job. You may think this was naïve, but when we’re flattered by marquee organizations to come onboard, researching why we shouldn’t is not a top priority.

Ideal references are people who’ve worked for your potential boss.

Extra advice: When you’re checking references on your potential employer, consider your sources carefully. You want someone who is in your court and knows something about the people who work there or who can connect you to people currently working there.

Being an active participant in these organizations not only helps you keep current with trends and skill sets, but also provides an in-depth pool of people who can give you the skinny on your employer, whether you’ve just joined or are wondering if things will change for the better. Again, be careful about your source, but if you hear the same thing more than once, pay attention.

Sometimes, okay regularly, I make sweeping generalizations. Here’s one for hiring managers. Please remember this simple truth: managing people is hard. It takes a high level of self-awareness, empathy, skilled communication, leveling of your own expectations up or down, and a sincere interest in the character of the people who work for you. That’s just for starters. I once had a conversation about hiring with a manager who had amassed a staff that was rumored to be very unhappy. He said, “I just throw things against the wall and see what sticks.” Translation: I hire a lot of people and if it doesn’t work out, I let them go. He didn’t actually think about the bruises left on those who had been fired.

For anyone who has experienced being fired from what they thought would be an entirely new chapter in their professional lives, the pain points do not easily fade. And for anyone who’s waiting for better days, it may be time to move on if you’ve seen others before you caught in the flames. Acceptance that a relationship isn’t working, whether personal or professional, can feel like cement dropping from your heart to your feet….until you realize you’re actually not stuck and can walk away.