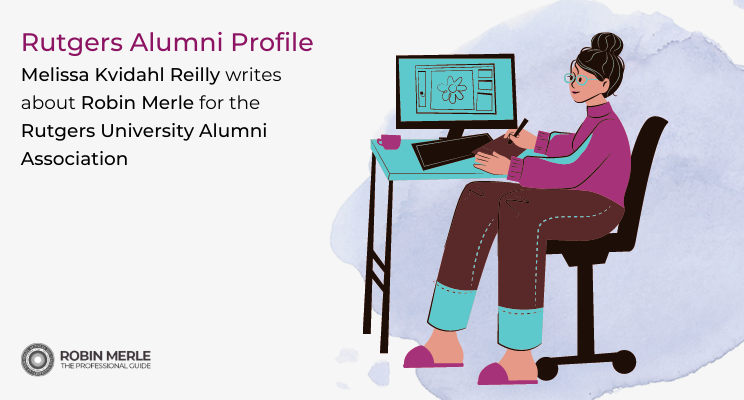 Starting a new chapter in life—earning a college degree, having a baby, moving to a new city—can be an exciting and happy time. But getting fired? Not so much. Robin Merle’s new book, Involuntary Exit: A Woman’s Guide to Thriving after Being Fired (She Writes Press, 2021), seeks to challenge that notion.

In the book, Merle RC’76 shares stories and wisdom from women who were fired and found that it opened new windows of opportunity. “One of my goals with this book is to help women realize how empowered they are,” Merle says, “and maybe this is rooted from my days at Rutgers.”

As a member of the first class of women to graduate from Rutgers College, Merle (then Robin Zimmerman) relished being a pioneer. But she also found herself overwhelmed at times and sought refuge in the welcoming and encouraging community of women at nearby Douglass College. “It was a great time and I could not have gotten a better education than I did at Rutgers,” she says. “The combination of support systems I had at Rutgers and Douglass truly set me up for success.”

She decided to write the book when she noticed that there were so many resources for how to grow a career—from writing a résumé to negotiating a salary and interviewing for a new job—but not many for those who have been fired and are dealing with the fallout.

Complicating this issue is the fact that many people don’t talk about getting fired. “When I started interviewing, many of these women had not spoken about their experiences to anyone but their partner or close friends and family because, and this is the sad part, being fired is draped in shame,” Merle says. “Each interview ended up being a cathartic experience, and each woman I spoke with referred me to another woman who had been fired. The truth is that it’s more common to be fired than not, and being fired isn’t a stigma.”

Merle’s book takes readers through the emotional impact of being fired and what comes next, whether it’s shock, betrayal, disorientation, searching for a new role, or reorganizing the plan altogether. Readers will find anecdotes, observations, and actionable advice to help deal with what can be a very tumultuous time. Some of the women interviewed in the book touch on the challenge of having their identities intertwined with their jobs; others discuss leaving corporate America entirely. On the lighter side, a few interviewees reveal the unusual ways in which they were terminated.

“I want readers to know they’re not alone and their feelings are valid,”

“I want readers to know they’re not alone and their feelings are valid,” Merle says. “They have a community behind them that’s restorative—and embracing the unknown as an opportunity rather than a threat can actually help them come back stronger than before.”

Merle hopes that her book is a source of inspiration for women (or any reader) finding themselves at a crossroads after losing their job. “I want them to know they can take the time to really think about what they want and figure out if they want to replicate the type of career they had before or do something completely different,” Merle says. “It can be an incredibly tough time, but there is a silver lining to being fired, and that is the ability to decide your own future.”