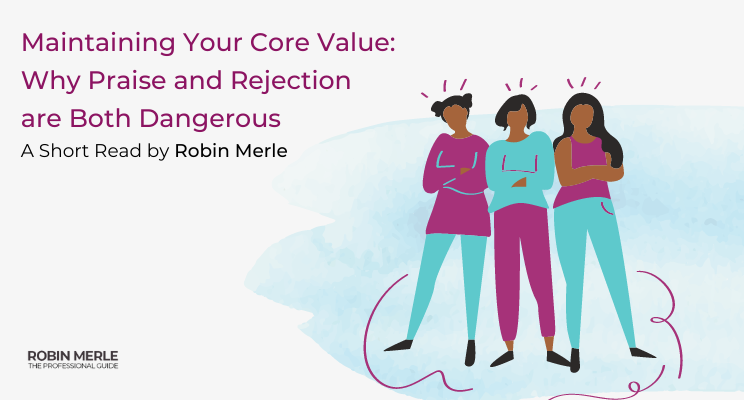 14 Mar Maintaining Your Core Value: Why Praise and Rejection are Both Dangerous

Posted at 20:29h in Management, Your Success by Sage Nellak 0 Comments
0 Likes
Share

When someone recognizes the great job you’ve done, especially when they praise you in a public setting, you feel amazing. You can actually feel your smile sweeping upward and your heart swelling with pride, as you write “Have a great day!” to everyone you email in the next hour. You’re being extolled for a job well done, not just in private, but with those who depend upon you or with those you want to impress. Let’s say this happens at Tuesday’s Town Hall Meeting. At Wednesday’s all-staff meeting, your boss cuts you off while you’re speaking and later pulls you aside and tells you that you’re taking up too much meeting time, causing the team to rush through critical agenda items. You feel angry and unfairly targeted and later wonder if you’re a secret narcissist who should perhaps skip the next meeting.

Your Value Meter is Out of Whack

What happened between Tuesday and Wednesday? Your core value shifted. You went from a 10 to a 1. On Thursday, you were mulling over what happened Wednesday and completely forgot about Tuesday. It didn’t count, you reason, because that was for show. You have lunch with your best work friend who assures you that you’re well respected in the department and the boss is an asshat. Your meter goes to 6. Later that day, you close a sale but it’s less than what you had hoped for. You’re at 5. On Thursday, your boss calls a meeting of people you consider key staffers, and you’re not invited. You’re back to 2. On Friday, you find out the meeting had to do with something totally outside your area of responsibility, and you rise up to 5. On Saturday, your day off, you’re exhausted and feel overwhelmed but can’t understand why. 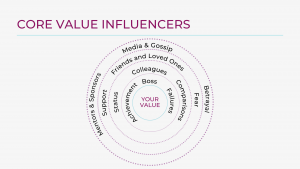 Very few of us begin our careers with a core value that doesn’t fluctuate. And by core value, I don’t mean those lists of values we’re periodically asked to create to glamourize our organizations, e.g., integrity, excellence, servant leadership, etc. I mean your self-worth—how you value yourself.

The Seesaw of Self-Worth

At work, we easily find ourselves tossed by the whims and waves of other people’s behaviors and opinions, and this sets us up for real emotional injury if furloughed, demoted, reorganized, or the worst, let go from our jobs. Our self-worth and emotional well-being have been tied up for years by how much we were recognized and promoted by someone else, or how much we were not. As I say in my book, Involuntary Exit, “Do you want to stake your value on someone’s dark side?” I’m talking about the boss who is always on the lookout to save her own job and spin whatever happens positively back to her.

The Feeling vs. Fact Filter

To prevent this seesaw of self-worth, there is an exercise that I created. It’s called the Feeling vs. Fact Filter.

For example, when your boss moved you into a new, smaller office, is it because he no longer values your contribution or because you have five new people joining the team? Here’s the kicker: it doesn’t matter. You still have the same core value whether you’re facing east or west in your new office.

Challenge Your Own Stories

Recognizing the facts of a situation can help you challenge the stories you’re telling yourself and realize they’re not true. This is much easier said than done. It takes practice, time, and vigilance. Like most emotional labor, this begins with awareness.