14 Jul Have I Recovered Yet?

Posted at 12:54h in Your Success by Sage Nellak 0 Comments
0 Likes
Share

For anyone who’s experienced sudden job loss, the emotional tsunami that consumes everything in its path is, well, unexpected—as tsunamis tend to be, maybe with an earthquake as a warning sign. If you’re at day one or two of your new life, you’re likely in a state of shock and numbness. This is a documented fact by psychologists Parkes and Bowlby, who developed a grieving framework based on attachment and separation. Yes, grieving. That’s what that odd feeling is that you’ve been experiencing–even if you wanted to leave, even if you hated your boss, even if you knew it was coming because you were the last one hired and the first one fired.

Parkes and Bowlby take us through four stages of grieving and healing. After you emerge from the shock of, “What just happened to me?” you enter the stages of yearning and searching. “How did I let this happen? If only I had….taken that other job, not pissed off that board member, agreed dumbly with everything I disagreed about, not abruptly left the room when my boss started gossiping about my co-worker.” Fill in the blank. There will be many blanks you’ll be looking to fill. Guess what? It doesn’t matter. It’s time to define yourself outside of your past role and face forward not backward.

Moving back and forth between private questioning and public performance leads us to perhaps our most confusing stage: Disorientation. This stage is filled with emotional triggers as we try to pull together what we want to do next, what we don’t want to have in our lives anymore, how we’re going to talk about ourselves and promote ourselves while quieting the loop of negative self-talk that sing- songs us awake at three in the morning. This is a tough stage because you’re essentially drawing completely new maps of who you are. If only we could hit, “Allow location while using this App,” we might be able to sleep better at night. 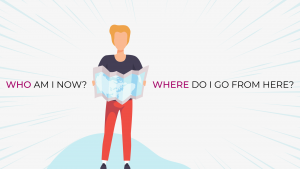 “They spend two hours on orientation at my company,” one fired leader told me, “Why don’t they spend two days on disorientation.” Leading with Edge podcaster Ashlee Livingstone and I have a plan that’s worth mentioning here. We’d like to help companies develop off-boarding programs so that everyone, no matter the circumstances, gets a thank-you release form with all the ways they made a difference and were valued while they were employed. Wouldn’t that quiet the “I’m nothing” lullaby? (Stay tuned for our Leading with Edge episode at the end of August 2022.)

Finally, after much processing of our loss and current state of affairs, we get to the fourth stage: Reorganization and Resolution. This is where we need to be to make the best choices for ourselves going forward so that we’re no longer defining ourselves by someone else’s compass. Recently, a woman asked me how she would know if she had reached this stage—if she was fully recovered, as she put it. In my book, Involuntary Exit, I compiled a list gleaned from the women I interviewed that you can check off to confirm you’ve made it to Stage 4. Here’s one of the many indicators:

90% of your conversation no longer concerns what happened to you in the past but what is happening now.

So, have you arrived? Are you good to go? Have you waded through the muck, scrambled over cliffs and ledges, fended off the biting insects, and made it to a summit where you have a 360° view? If so, take a breath, enjoy this achievement, and begin making your way along a new path down the other side of the mountain.